Life as a volunteer

What a great day at the White Shark Projects!

All of us volunteers went on the boat and shared this wonderful trip. It all started with a sighting of a Humpback Dolphin whilst getting the anchor and wetsuits ready at the bow. It was a brief sighting, as we only saw the back twice before it was gone, but it set the mood for this awesome trip.

We did not have to wait long before our scenting brought in the first shark, a female about 3.5 meters. As Volunteers Emma and Elise were recording the data, they named her Emalise. Emalise was very calm around the boat for the first few passes, but then her feistiness increased and she accidentally banged against the cage, which must have been a sight for the clients in the cage!

We also had a visit from a smaller shark, about 2 meters long, and the smaller Shark and Emalise took turns around the boat. After Emalise hit the cage, both sharks went away for some time. In this break, we had a fleeting visit from this big shark with massive scars on its left side. Would love to know what caused those scars…

For a while, we did not see any sharks, but we could not return to shore as the tide was too low for our boat to clear the reefs at the harbour. Volunteer Ryan asked if he could bring out the seal decoy, and Tom said sure, assuming we would start heading back in a few minutes. 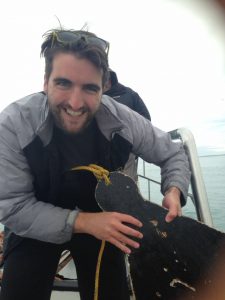 Suddenly we had a new shark! She circled the boat once and Tom asked Ryan to bring in the decoy, but skipper Gerald wanted to see if the shark would go for the decoy. From the fly deck, I could follow the shark as she made her way from the stern towards the bow on the port side of the boat. I lost her when she went around the bow and two seconds later, she leaped halfway out of the water almost swallowing the decoy. Seeing a Great White Shark practically leaping vertically out of the water, is a sight never to be forgotten.

Sadly, it was time to head back to shore. On shore, we swapped the wet wetsuits for dry ones and left the boat as there was no room for volunteers on this second trip, but honestly, a second trip would be hard pressed to top this one.

Volunteering at the White Shark Project means getting up early in the morning, and assisting the crew to prepare the wetsuits, life jackets, bait and chum for the cage diving trips. Then, once on the boat, you assist the skipper and crew to set the anchor, deploy and fasten the cage, and get clients into the wetsuits. From there it is all about the sharks! Someone, either crew or volunteer, is on chum duty – scenting the water with fish oil to get the sharks to come to the boat. Once a shark arrives, we have to start recording data regarding the shark’s behaviour, scars and other features.

For three hours we enjoy watching the sharks and we help the clients, should they need towels, food, or if they become sea sick. When we are ready to return to shore, we again assist the crew with retrieving the cage, and then the anchor. As a volunteer you get the privilege of going to the fly deck whilst speeding to and from the dive site, but watch out for spray 😉

Back on shore we empty and clean the boat, and back at the garage, we wash the wetsuits and hang them up for drying. Then it is all about enjoying the rest of the day in the beautiful area and hopefully repeat it all the following day.

Should there be days where the boat cannot go to sea; the crew will take you on excursions to various places such as Cape Agulhas the southernmost point of the African continent. Or to Bettys Bay to see the endangered African penguins; Hermanus for some coastal whale watching; Cape Town or maybe even to Panthera Africa, one of only seven true big cat sanctuaries in South Africa.

All in all, you are sure to have great experiences every day. Be sure to at least once go to the WSP Recycle Swop Shop and experience the kids bringing recyclables and exchanging them for school supplies, clothes or toys.