I’ve just read an article in a local South African newspaper, which at first made me smile so broadly with delight but then, a few paragraphs later, made me fall into a deep despair. Allow me to explain my bipolar-like reaction to this article:

The heading reads: “Plan in place to safeguard our whales” and the article kicks off with a beautiful image of a breaching Humpback Whale. This is followed by the wonderful news (hence my smile) of how the Humpback population has made such an impressive comeback, that we were fortunate enough to have an estimated 15 000 Humpbacks visit our shores this season. Wow, my heart was literally breaching along with that Humpback in that image.

This wonderful news is then followed by their Whale Friendly “plan”. To prevent whale calves from entangling themselves in the shark nets, the KwaZulu-Natal Sharks Board, (whose job it is to keep bathers along the KZN Coast safe from shark attacks), has decided to remove two shark nets from two beaches, which whale mothers seem to visit with their new born calves. Fear not, they exclaimed, beaches will be kept safe with the deployment of additional drum lines. 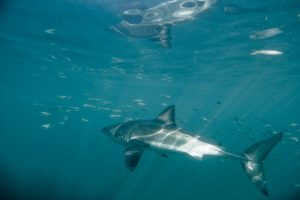 According to their 10 years of shark capture data, “drum lines matched the catch statistics of nets in terms of the capture of both the great white and tiger shark.”

“Both the Kwadukuza Municipality and the Sharks Board believed this approach served in the best interest of the environment.”

Seriously? The environment? I guess sharks do not feature in their definition of environment! An estimated 26 Great White Sharks are killed annually by the archaic methods used by the KwaZulu Natal Sharks Board to keep swimmers safe. South Africa was the first country in the world to protect the Great White, so why do we continue to kill them? Of course, we must keep people safe, but we need to keep sharks and all the other Marine Species safe too. Look at Shark Spotters in Cape Town, why can they not implement a similar programme on the KZN coast?

There is still so much we do not know about Great White Sharks, and I fear that they may not live long enough for us to discover all their wonderful secrets.