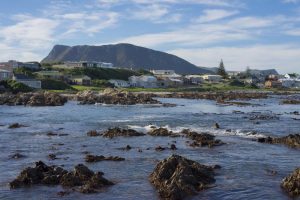 Photograph looking over the picturesque bay of Kleinbaai.

Last month White Shark Projects hosted their annual blue initiative campaign called 21 Days of the Ocean for the fifth year running. The objective of the campaign is to raise ocean awareness for communities in the Overstrand area. White Shark Projects were showing how some of our daily activities, although seemingly innocent, can have a negative impact on the ocean. They were showing us the small changes we can make to our lives that will help make our ocean healthier. White Shark Projects believe that education is vital in aiding the conservation of our beautiful marine ecosystem. 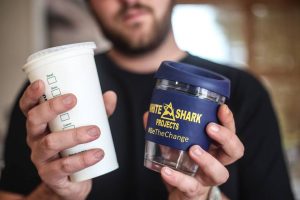 The event ran for a consecutive 21 days from the 1st until the 21st September. The idea behind the 21 days is that research suggests it takes 21 days for a person to break a bad habit. The theme for this year was ‘21 Messages in a Bottle’. This means that every day of the event, White Shark Projects set a small challenge for the public to take part in, which they posted on social media. Examples of these were challenges like buying a reusable travel mug instead of using disposable take away coffee cups, cycling when possible instead of driving, composting your food products and much more.

Teaching the children at the Butterfly Centre, Stanford about all the different shark species.

However, the biggest part of the 21 Days for the Ocean campaign is the environmental education White Shark Projects will provide for the community. This year we organised fun filled visits to a number of pre-schools and early learning centres in Blompark, Masakhane and Stanford. We were showing the children skills in upcycling and how to turn their plastic bottles into amazing planters and doing fun drawings and colouring in of marine life and conservation themed pictures. We also taught the children about some of the weird and wonderful shark species there are in the world, including those found in South Africa. 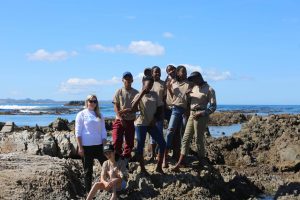 One of our marine biologists Georgie took a group of local children rock pooling in Kleinbaai.

White Shark Projects organised a few outdoors activities for environmental education during the campaign. We took a group of local children down Kleinbaai beach for rock pooling to learn about all the peculiar little creatures that live there. We found lots of great animals including anemones, sea urchins, starfish, hermit crabs and even a skate mermaid’s purse (egg case). After the rock pooling we undertook a 21 minute harbour clean-up with the children and talked to them about the environmental impact of the litter we were finding. White Shark Projects also took the children to Cape Town where they helped us with a clean-up along Lagoon Beach. Following this, we visited Two Oceans Aquarium so they could learn more about the special marine life that is in our oceans. I am not sure who had more fun on the outings… me or the children.

One of the main events during the 21 days was the White Shark Projects Swop Shop in Masakhane. The children collect recyclable litter from the streets of their neighbourhood and bring it to the Swop Shop where they can trade it for points. They can then “spend” the points they have earned on goodies such as clothes, stationary and toys. After the children have chosen their goodies they are then given a tasty mug of hot soup to enjoy.

One of the residents at Silwerjare with her beautifully decorated card.

White Shark Projects also visited Silwerjare community centre, Blompark where we decorated ocean themed cards with the residents which they could keep as a souvenir of their day. After this, we served the residents tasty chicken pie and veggies for lunch which was cooked by the wonderful ladies in our office.

One of the main topics during the campaign is plastic shopping bags as they are one of the biggest causes of plastic pollution. White Shark Projects volunteers conducted a ‘Ban the Bag’ survey at the local SPAR supermarket, Gansbaai. The idea behind the survey was to see if members of the public would support a ban on single use plastic shopping bags. An incredible 48 out of 49 people said they would support a ban on plastic bags and would still shop at SPAR if plastic bags were banned. This shows that even if a supermarket supports a ban not only would their customers still shop there but they would be helping to protect the oceans we heavily rely on. We also gave a presentation for local businesses on the environmental effects of straws and why we should change to eco-friendly alternatives. 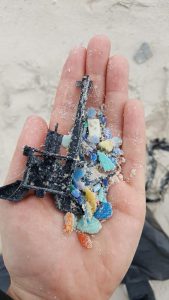 A handful of small pieces of plastic found on one of the 21 minute beach clean-ups.

White Shark Projects volunteers also conducted a 21 minute beach and harbour clean-up every day for the 21 days. Staggeringly, on just one 21 minute clean-up the volunteers managed to fill up a 2 litre plastic bottle with cigarette ends….. but it wasn’t all hard work, it meant that they got to watch the whales and  enjoy the breath taking views along our coastline.

We celebrated the last day of White Shark Projects 21 Days of the Ocean campaign in the magnificent Platbos forest. We asked our guests who were mostly from the tourism industry to take part in our ’21 Messages in a Bottle’ and pledge one thing that they will do or give up to help save our oceans. After thinking about what they would like to do for the ocean, our guests wrote their pledge on a paper leaf and placed it in one of the 21 bottles that were hanging from the trees. 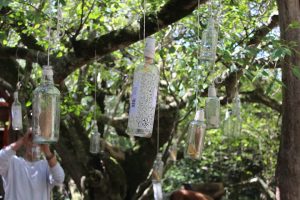 Our crew and guests pledges inside the 21 bottles hanging in the trees.

This is just some of the environmental education activities White Shark Projects organised during the 21 Days of the Ocean campaign. We hope that we have raised ocean awareness not just physically in our local communities but also worldwide through social media. White Shark Projects will carry on using environmental education as a tool to help prevent further damage to our oceans. #BeTheChange 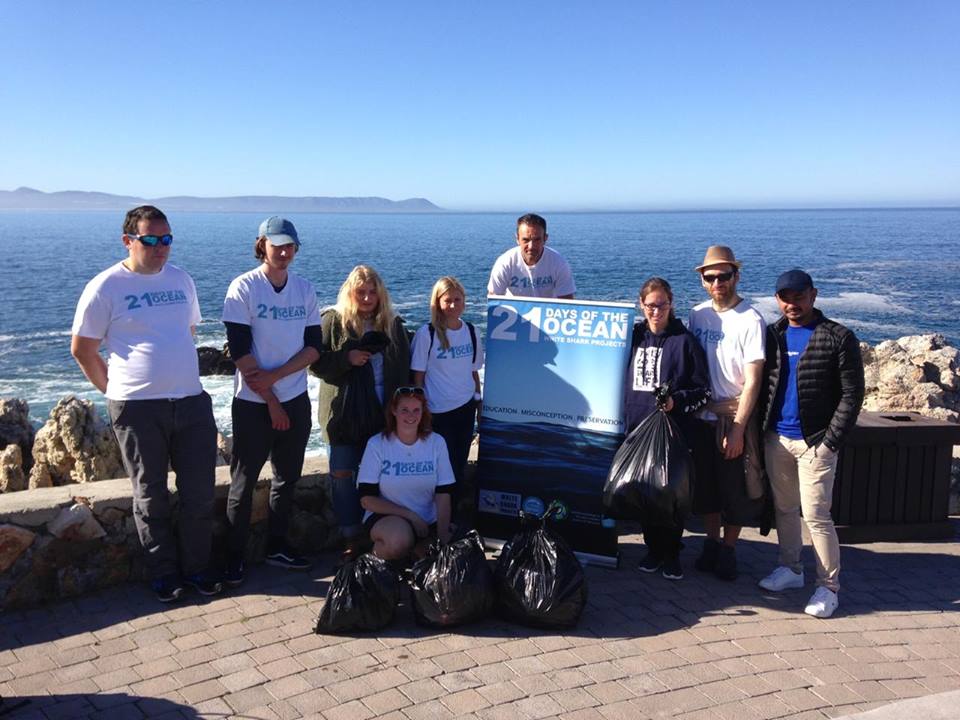 White Shark Projects volunteers after a coastal clean-up in Hermanus.