What Goes Up…Must Come Down

One of White Shark Projects aims is to raise ocean awareness and show the small changes we can make to our lives that will help make our oceans healthier. As the New Year is almost upon us and the world is getting ready to celebrate, we are thinking of ways to celebrate while preventing further damage to our oceans. White Shark Projects would like people to consider using an environmentally friendly alternative to one of the top marine polluters – BALLOONS. 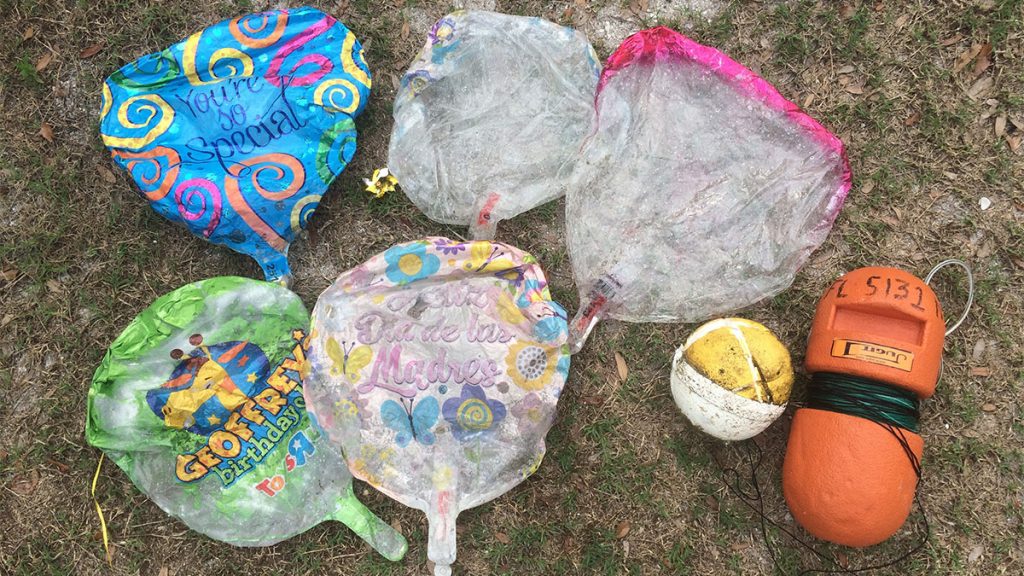 Balloons are used all over the world to celebrate things like the arrival of the New Year, weddings, birthdays, football games and even just to keep your children entertained. Everyone loves seeing those balloons gracefully float off into the distance right? HOWEVER, when balloons are released, they do not simply fly away and disappear into thin air. What goes up must come down, and eventually balloons make their way into our rivers, streams and oceans where they have a negative impact on wildlife.

When you actually stop and think about it, releasing a balloon into the air is basically littering. 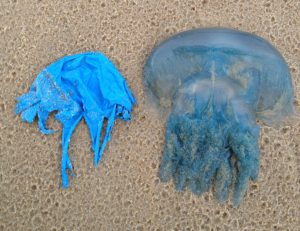 Balloons and pieces of balloons end up in the ocean where they are consumed by marine animals such as dolphins, whales, fish and turtles. You have to admit, a balloon looks just like a jellyfish to a hungry turtle. 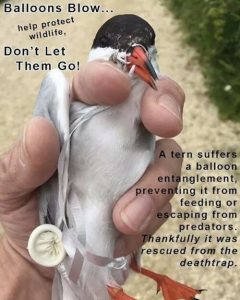 A tern entangled in a balloon – Photo credit: Balloons Blow

When balloon pieces are ingested they get stuck in the animals digestive tract which leaves them unable to take up more nutrients – resulting in a slow painful death by starvation. Many birds have also been found entangled in balloon ribbons/ strings as well as ingesting the balloons, resulting in death.

The Marine Conservation Society (MCS) volunteers found an increase of over 50% in the amount of balloon litter on UK beaches between 2015 and 2016. Balloons are usually made of mylar or latex material. Many people believe that latex is biodegradable, however, in reality it may take years to degrade meaning it is still a major threat to our wildlife. Emma Cunningham, the MCS Pollution Campaigns Officer said in a web post “”Some people believe that because latex is natural balloons made of it are harmless once let go. This just isn’t the case. Latex may last for up to four years in the marine environment.” Balloons that are made of mylar can last even longer in the environment as they are made out of a type of plastic which never fully degrades.

*Lanterns are NOT an environmentally friendly alternative as they also end up on our beaches, causing choking and entanglement hazards to wildlife, as well as being a fire hazard.

Balloons Blow has suggested great environmentally friendly alternatives to balloon releases. Here are just some of them:

Let the idea of balloons deflate and choose alternatives that prevent further damage to our oceans. White Shark Projects also want you to spread the word, tell your family and friends as we believe that education is vital in aiding the conservation of our beautiful marine ecosystems.

Follow White Shark Projects on our social media platforms to keep up to date with ways you can help the environment: 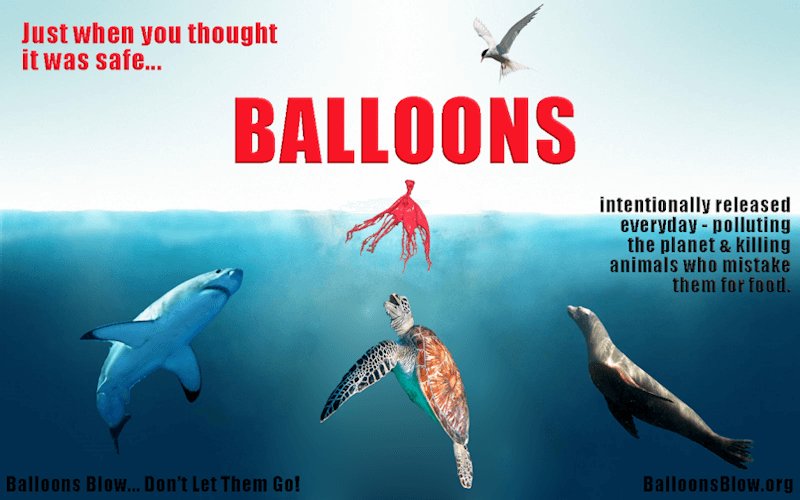