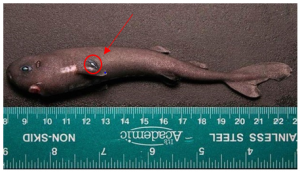 Recently, scientists identified a tiny male shark specimen that had been frozen in cold storage since 2010 and it turned out to be a rare catch! It’s only 14 cm long (5.5 inches) and one telltale feature gave it away. It has small slits (or pocket glands) above its pectoral fins, which produce bioluminous fluids. It is thought to be used to attract prey, or it might attract possible mating partners, or it is used to conceal itself from predators. It was found in the Northern Gulf of Mexico and it was only the second pocket shark ever found. The original specimen (Mollisquama parini), was collected in 1979 in the Nazca Ridge Pacific Ocean at 330 meters deep (1083 feet). Scientists found out that the newly discovered shark had fewer vertebrae than the first shark, plus much of its body was covered in light-producing photophores. Based on these differences, it was determined that the first and second shark are separate species and has been scientifically named Mollisquama mississippiensis. 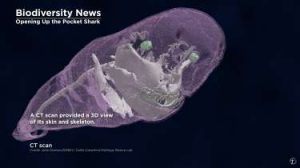 To preserve the specimen while studying its anatomy, scientists used advanced imaging techniques. A CT scan provided a 3D view of tis skin and skeleton and a synchrotron scan (a high-powered X-ray beam) created a much more detailed picture of both hard and soft parts. Scanning allows researchers around the world to “dissect” the pocket shark without ever touching it. This shows that the pocket sharks teeth grow in rows and are replaced after each other, just like the other shark species. The pocket shark has quite a balloon-shaped head which is created by a large face muscle parallel above the jaw and under the nose. But unfortunately genetics and anatomy do not tell the whole story, like: how rare is it? What are the eating habits? What is the geographic range? To find this out, scientists have to find and observe living pocket sharks in their natural habitat. 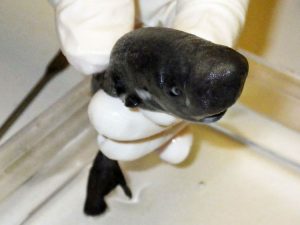 The fact that only one pocket shark has ever been reported from the Gulf of Mexico and that it is a new species, underscores how little we know about the Gulf, especially its deeper water, and how many additional new species from these water await discovery. But until we know more about these little guys, just enjoy the thought there are tiny, pocket-sized sharks, with their own little pockets, and glow in the dark.

For more information about sharks – read our previous blogs!