“What would you like to be when you grow up?”

Most young boys would throw out answers like policeman, fireman, superman. My answer was Andre Hartman!

For those of you who don’t know who Andre Hartman is, or how he could be a hero to a boy from England then here’s a brief summary.

Andre changed people’s perceptions on Great White sharks worldwide by being the first person to free dive and interact with white sharks on camera. Andre is the original sharkman and paved the way for the future divers and film makers that have followed helping remove the negative image that surrounds these highly misunderstood and misrepresented animals. 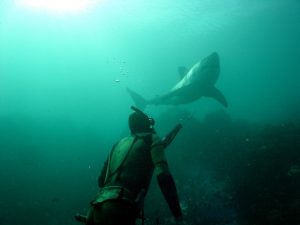 Andre helped put our town of Gansbaai on the map in the eyes of the world. Documentary teams and wildlife photographers from around the globe came to go out with Andre to film and photograph the sharks. These shots are still to this day some of the most iconic scenes captured with these apex predators. 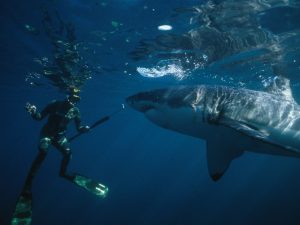 Andre was a highly experienced spear fisherman and had his springbok colours. The first experiences and interactions Andre had with white sharks were when spearfishing, starting in with his first encounter back in 1977. Sharks are often seen by spear fishermen due to the blood being released by the speared fish. Andre, like others who spearfish in areas where you may come across large sharks had to learn how to read the sharks and push them off when needed.

As well as spear fishing Andre also came across sharks when working as a commercial diver. Andre worked as a commercial salvage diver, helping to explore, map and salvage shipwrecks around the Cape. One of these wrecks was the famous HMS Birkenhead, famed for pioneering the ‘women and children first’ protocol used by ships worldwide.

Spearfishing and diving in Gansbaai, around the now world-famous Dyer Island, Andre learned more and more about the behaviour of these sharks. Noticing that Great Whites could be seen in the Gansbaai area year-round, as well as having the winter-feeding grounds of Dyer Island and Geyser rock (home to Shark Alley), where the awe-inspiring shark v seal interactions (breaching) can be seen. Andre decided to open a business taking tourists out to photograph and cage dive with the legendary Great White sharks. The cage diving industry grew with other operations opening and more and more tourists visiting to do this once in a lifetime experience. Gansbaai became the Great White shark capital of the world! 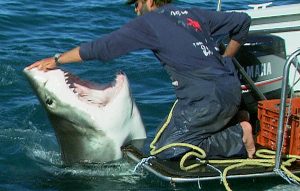 I have been obsessed with sharks since before I can remember. The moment I saw a clip of Andre interacting with my favourite sharks on TV I was sold. I was going to get there somehow and try and help change people’s perceptions of these legendary creatures. I’ve now been working with the sharks in Gansbaai living my childhood dream for 5 years and that is all down to the inspiration that is Andre Hartman.

To keep up to date with shark activity, follow our social media pages: 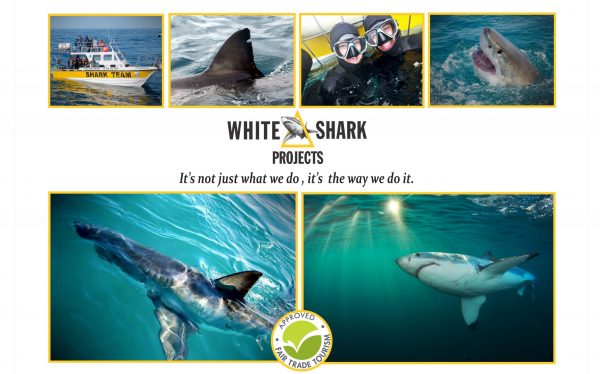