Here in Gansbaai, I am lucky enough to see what I think is the most beautiful animal in the World – the Great White Shark. As a marine biologist, I get asked many wonderful questions about these majestic creatures while on White Shark Projects cage diving vessel, Shark Team. One of the most common questions being, “Do sharks sleep?”

Very little is actually known about the sleeping habits of sharks. What is clear, is that sharks do not sleep in the traditional sense like us humans do and do not divide their sleeping hours evenly between day and night. It is more a case of switching between wakeful and restful states. 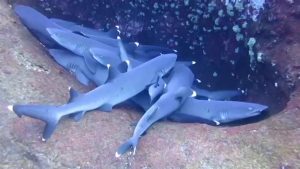 In 2017, an amazing video was published of white tip reef sharks cuddling up together and having a snooze. The video was taken in waters off of Mexico’s Pacific coast during a dive organised by Scubacadémie. The divers encountered a large group of roughly twenty whitetip reef sharks huddled together on the ocean floor. Most of the sharks were lying completely motionless while some appeared to fidget – perhaps they were dreaming they were chasing fish. Whitetip reef sharks are able to rest on the ocean floor because of small openings behind the eyes called spiracles. When the shark is in contact with the sea bed and cannot pull water in through its mouth, the spiracles pull in water which then exits through the gills. 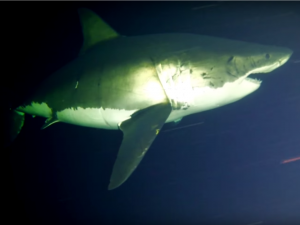 In 2016, what was believed to be the first ever video clip of a great white shark taking a nap was captured by a robotic submersible. The footage which aired on Discovery Shark week’s Jaws of the Deep, showed a great white shark nicknamed ‘Emma’, swimming at night around Guadeloupe Island. During the day, the shark tended to stay in deeper waters near the island’s seal colony, however, at night she was filmed swimming close to shore in shallow water. The shark was also facing into a strong current with its mouth wide open, probably so that the oxygen rich water could flow over her gills with minimum effort. The large female shark seemed to be almost catatonic leading researchers to believe she was in a sleep-like state.

Unlike whitetip reef sharks that use spiracles, great white sharks have to constantly keep moving for the water to flow over their gills. Research suggests that swimming motion in sharks is actually coordinated by the spinal cord and not the brain – which may allow part of a great white shark’s brain to go into a restful state while it’s still moving.

There is still so much to learn about these mysterious creatures, but it appears like us, they also need “shuteye” and switch between wakeful and restful states.

I wonder what sharks dream about…..