Those of you who read our last blog will know how amazing sharks are! The way the skin works, the gills, the teeth and a lot more!

But what about the internal anatomy of a shark? How does that work? Are white sharks really “cold-blooded” killing machines or are they “warm-blooded” gentles? Let’s go from snout to the tail… 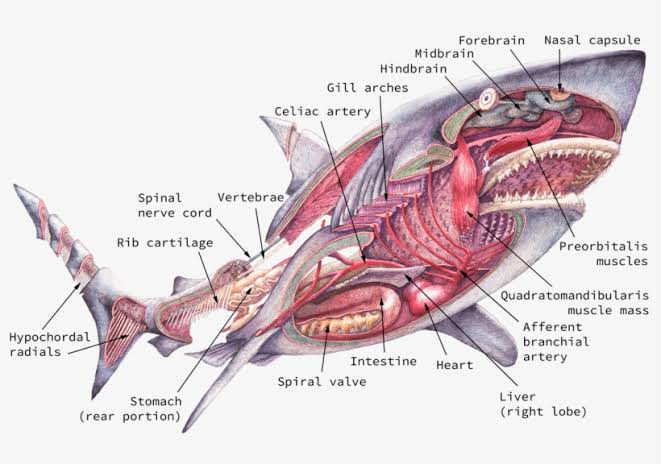 People are so fearful of these ocean predators that they have developed myths about them, such as their ability to smell a tiny drop of blood from miles away.

While sharks do have a strong sense of smell, this statement is largely overblown. Some sharks can identify blood a quarter-mile (400 meters) away, but the scent doesn’t reach them at once or necessarily cause them to attack. The sense of smell is where the nasal capsule comes in. It is the cartilage which encloses the embryonic nasal cavity. It basically is that the sensory capsule is responsible for the sense of smell, which is hundreds of times stronger than a human’s. Smells reach a shark through the currents and it would take time for the scent to travel that distance to a shark’s nostrils. The motion of the ocean carries smell molecules with it, so, the more motion, the faster the smell will travel. You can compare it with our chum slick. On our cage diving vessel, Shark Team, we mash up salmon to get all the smelly oils out, mix it with sea water, then throw it into the sea. On a day with more wind / motion, the chum slick will travel further and faster and increases our chance to see a shark.

Astonishingly, a great white shark’s brain is Y-shaped and is approximately 60 centimeters long. While it is not particularly large or heavy, especially in comparison to the entire size and body mass of the shark, there is no concrete evidence that size has a direct correlation to ability when it comes to the brain. What has been discovered is that shark species that do not hunt or approach prey stealthily (such as bottom-feeders and filter feeders) have smaller, lighter brains than their hunting sharks. The brain consists of different regions, the hind-brain, mid-brain and forebrain which consist of various specialized regions too. These regions look like pearls, strung on a complex string. The brain is hollow in most places, perforated by uneven ventricles (a hollow part or empty space within a solid object in an organ). The ventricles are filled with a so-called cerebrospinal fluid, which assists with the chemical regulation of the brain. The shark’s sense of smell is particularly acute, and takes almost two-thirds of the brain. Of course, the brain is responsible for the usual body functions as well. It receives and processes messages of hunger, exhaustion, electromagnetic pulses and so on. There were even reports of sharks demonstrating a degree of curiosity (a behavior we also witness from our boat), this is quite an advanced impulse amongst animals that were believed to be stupid. This proves that we have only scratched the surface of these fascinating animals and the qualities that make them so unique.

Basal sharks (primitive, or closer to the “roots” like the great white shark) have a single undivided preorbitalis muscle and quadratomandibularis muscle mass.

These muscles are part of the shark’s feeding mechanisms and cause the jaw extension in an attack. When a shark goes for the prey, it extends its jaw forward which causes the water, including the prey, to be sucked into the sharks mouth. This movement increases the success of the attack.

A shark’s liver is different to most animals. It takes up much more internal space and serves more functions than simply helping with digestion. The oil inside a shark’s liver is called squalene which is much lighter than water, so in turn helps a shark maintain buoyancy. Sharks are naturally heavier than water and the lack swim bladder filled with air like bony  fish. Shark livers take up significantly more space inside their bodies than the livers of most animals. Sharks that stay close to the ocean floor tend to have smaller livers, making up about 5 percent of their body weight. However, sharks that roam the open ocean have significantly larger livers, sometimes making up to 25 percent of their body weight and filling up to 90 percent of their body cavity.

Now for the question we have all been waiting for: Are white sharks “cold-blooded” killing machines or “warm-blooded” gentles? 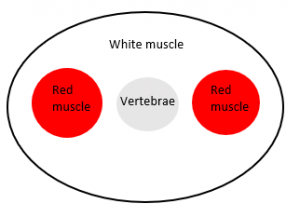 Well, white sharks are what we call endotherms, this means they can regulate their own body temperature up to 14 °C above the water temperature. But how do they do that? White sharks have red and white muscles (see figure on left), red muscles are for “cruise control” or slow-muscle action while the white muscle are used for fast sudden bursts of speed. They have a net of veins covering the red muscles and because they always have to swim to be able to breath, they always move the red muscles alternately. These contractions cause the tail to move sideways enabling the shark to swim.  The red muscles give off heat to the net of veins because of the non-stop movement and the warm blood will flow to the rest of the body.

So actually great white sharks are not “cold blooded” killing machines. They are “warm blooded” and curious by nature. They are highly developed and very interesting to learn about!