The last time I wrote, I was living and working in Spain and then also travelling around to little areas nearby. But if you know me, you know that’s not all I would have up my sleeve when it comes to adventures to be had. You’d be right, too. After two and a half months of that, I got on another plane (or two) and headed down to the southern hemisphere. Around 23 hours later I was landing and stepping foot onto my 38th country, South Africa. I can tell you about South Africa and all the nice things it has to offer, but so can any other travel brochure or blog or website. Plus, that’s not why I was really there anyway. Therefore, this won’t be that post. What mattered much more to me than the country itself, was the locals I met while I was there. So if you’re a fan of conservation talk, me geeking out, or Shark Week, you’ve come to the right place. 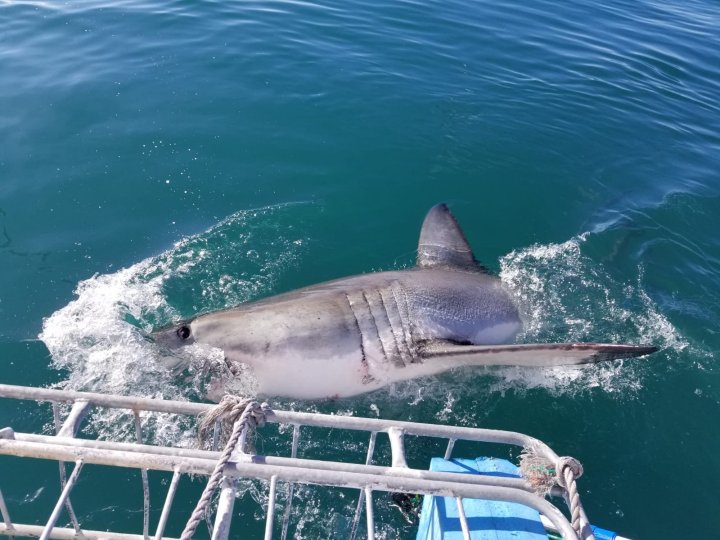 Shark week is great. For that entire week that would be mainly the only thing my TV would have on it, and I would see just about every episode they had to offer. But it also gives you what you want to see. It shows you the “Jaws” image of a shark, the scary pieces and the sensationalized clips. Which is what everyone wants to see. I get that. What it doesn’t do is show you how they actually are most of the time, what really threatens them, and how cute they are! Trust me, if you only saw images of me when I was eating something, being teased with food, and just plain hangry…you’d be scared of me too! 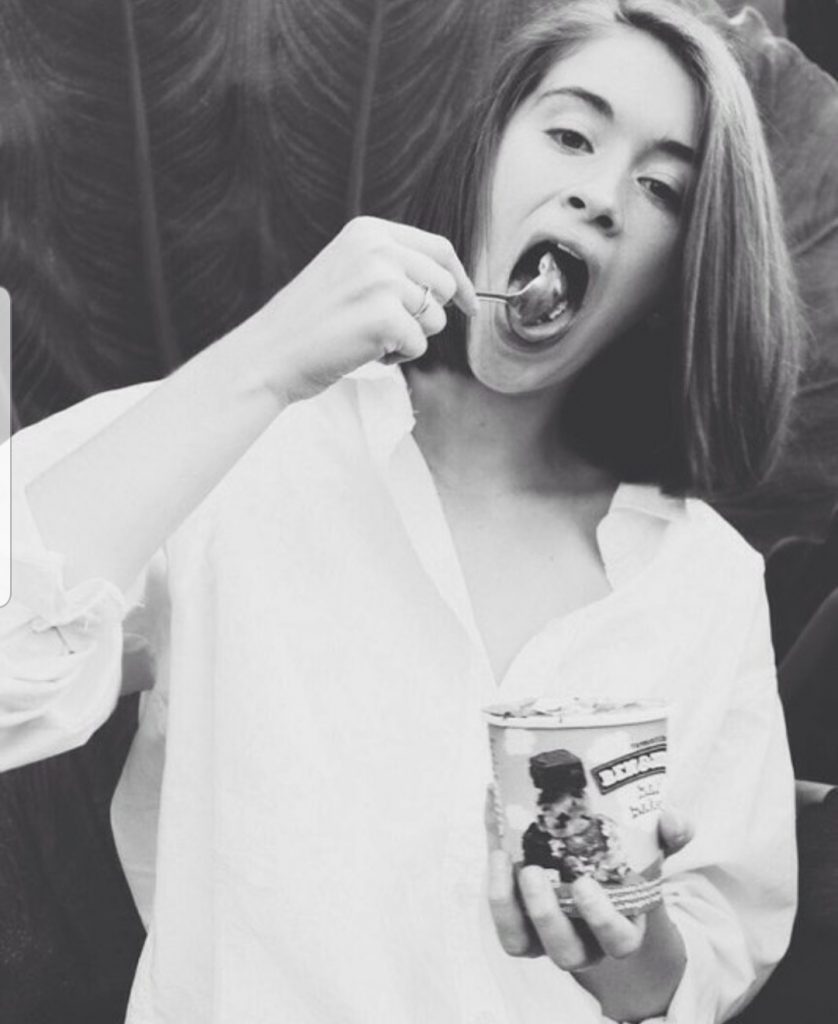 I know, I know, I used the word cute to describe a Great White Shark…you’re already thinking I’m nuts. But I mean, come on, look at this guy! Meet Ralph! 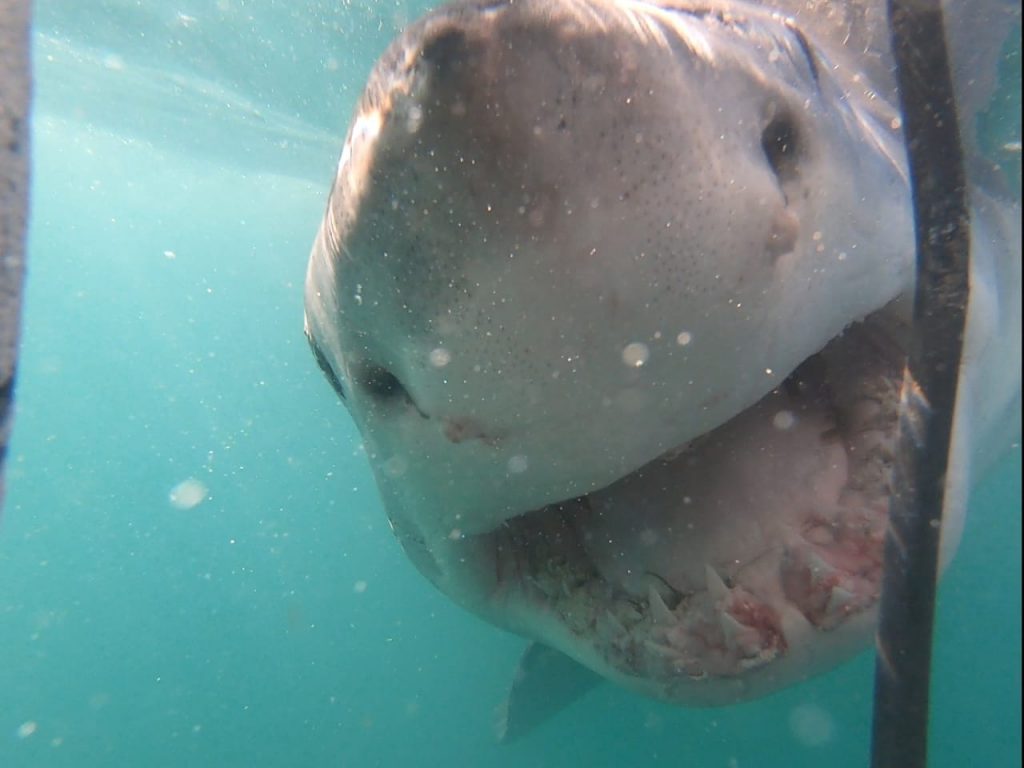 (Disclaimer: I’m not sure what this sharks name was. But Ralph is a cute name, this is a cute shark, and he’s my screensaver…so for the purpose of everything good, his name is Ralph.)
Oh but there’s more than just Ralph!

There’s Freckles. She is the one I first named, and hands down my favorite. A big girl she is 4.5 meters (15 feet) and has dark spots along her sides, that look like freckles. When she comes around she knows what she wants, and she goes after it!
Then there’s Dora! Another shark that I named. She is a bit smaller. She is only around 2.5 meters (about 8 feet) big. A little girl that likes to explore and check things out, but not much more than that. Unlike Freckles, she isn’t one to go after the bait, but she will come by again and again and see what’s going on…like Dora the Explorer. Which is how she got her name.

Each shark has it’s own personality and how they behave can change on some days…like humans! You can’t just sum up all humans with one stereotype or description. Some are shy and more reserved and others will go all out and make their presence well known. And unfortunately some are not as nice as others. In extreme cases we have serial killers to prove this. Much like sharks. Most of them are just curious and trying to survive, but for whatever reason (like people) some go a different way. So when you hear of a shark “attack” think of this. 1. Great Whites weigh around 2,000 pounds… if they want to attack something they will. A two ton thing going after a couple hundred pound thing…there’s no competition there. But when you hear about this, it’s typically just a bite. Well, sharks don’t have hands and they can’t just poke something to see what it is. So they use what they have to try and “test it out” to see what that something really is. Also, keep in mind, the ocean is the SHARK’S HOME. We are invading their home. If there’s something new in your home or on your plate and you’re not sure what it is, you’re probably going to poke it. And if it’s something that you think is potentially food, you’ll probably take a little bite out of it to see if it’s any good. Exactly like sharks do. It just so happens they have many, many more teeth and are on a larger scale than what we humans are. 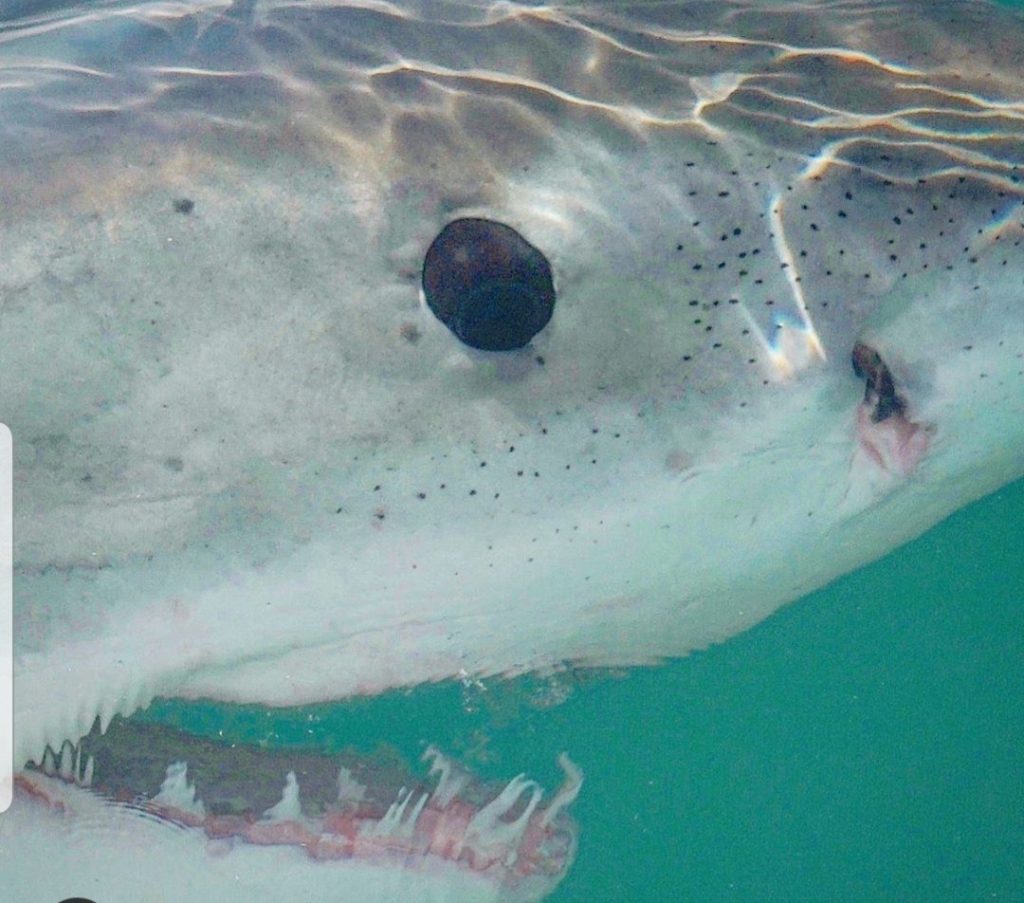 Not my picture, but a fellow volunteers. You can see more of his photography on instagram @photo_by_jungle

It’s important to have an accurate image of what these magnificent creatures are really like. If you continue to just see the “Jaws image”, you’re not going to care so much, or you’ll fear them and you’ll be missing out. Don’t get me wrong, I’m not telling you to go into the sea and try cuddling with one! No, no, (though that would be cool!) I’m just saying respect them. If you can see them for who they really are, and respect them, then you can care about them too and that will make a world of difference. Sharks are heavily threatened right now and humans are the cause for that. They are caught as bycatch and sought after for their fins. Shark Fin Soup is a delicacy in Asian countries and a status symbol because of how expensive it is. So these sharks are hunted just so someone can cut off their fins, then push the shark back in the water, where it will slowly and eventually drown. (Sharks have to constantly be moving in order to breath, without the fins, they can’t move.) The fins are just cartilage, the same as a human ear, it has no nutritious or flavorful aspect. As if that wasn’t already an issue, it gets worse. The bigger the fin, the more money it will bring in. So the bigger sharks are a greater catch (the “bigger the better” motto comes into play here). But female sharks don’t reach sexual maturity until they are 30-35 years, or about 5 meters big. That’s a long time. Then they have a longer gestational period too, making the repopulation process way to slow to keep up with the rate that they are being hunted. Lets say a 5 meter female shark is caught for the fish trade of any sort. That’s one less shark in the water. But lets say that female shark was also pregnant. Great Whites can have 2-14 pups (babies), so that’s potentially 15 sharks that are gone from our oceans entirely. This is so important because sharks are the doctors of the oceans. They eat the animals that are sick or wounded, meaning there is less disease going around the oceans. If you like fish and such, this is a good thing then! They are important and we need them alive and swimming around enjoying their homes, so that we can continue to enjoy our homes. Sharks keep the ocean clean, and the ocean provides every second breath of oxygen for us. We need them and they need us to protect them! 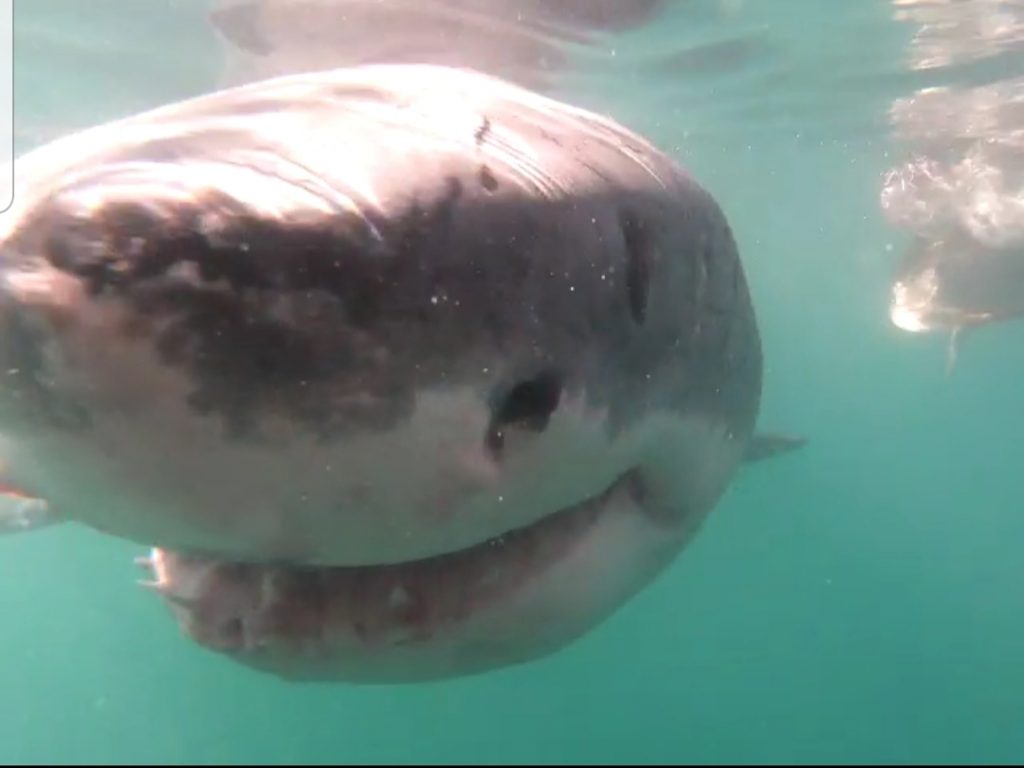 Now that you know my favorite sharks and why they’re so amazing, it’s also important you know what you can do to make a difference and help them too! You don’t have to go all the way to South Africa to do this, although if you do, let me know and I can most definitely set you up with that! Seeing them in person will let you see first hand how amazing they really are. But, even in the middle of nowhere, you can make a difference for them by not buying shark products. This obviously includes shark fin soup, which can even be found in Chinatown in NYC, it’s not just an Asian country thing. But shark can also be found in frozen fish sticks, make ups, fish and chips, vitamins, and tourist souvenirs. (Names to check for can be Squalene (in makeups and medicines), Whitefish, Gummy Fish, Flake, Rock Salmon, etc. in foods) Check what you’re buying to see that it doesn’t have that in it, and really know what you’re getting. But also, just be an advocate for them. Sharks are very misunderstood and if people continue to talk about them in a negative light, it only spreads the fear and hate they already have. We don’t need that. We need people who see them for who they really are and share that with others. Whether it be kids or adults. ANYONE CAN BE AN ADVOCATE AND A WORLD CHANGER. For example, before going down to South Africa I didn’t know it was possible to love something that you couldn’t even touch, but here I am loving all of these sharks so much. You might not be able to do something hands on, or show love in a typical way, but it can be felt and the difference it makes can be huge!

Love sharks and have a passion for conservation? – volunteer with us!