Sharks never cease to amaze us. There are over 400 different shark species and scientists are continuously learning new things about these incredible ocean creatures. 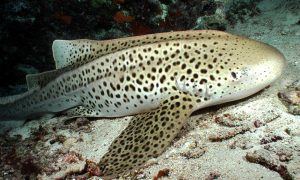 The zebra shark (Stegostoma fasciatum) is a species of carpet shark. It is found throughout the tropical Indo-Pacific, coral reefs and sandy flats to a depth of about 60 meters (200ft). Adult zebra sharks are distinctive in appearance; with five longitudinal ridges on their cylindrical body, the dorsal fin starting halfway the body, and a pattern of dark spots on a sandy coloured body. However, this shark got its name from the pattern of a juvenile zebra shark, as they consist of light vertical white stripes on a brown background. This species is nocturnal and spend most of the day resting motionless on the sea floor. At night, they actively hunt for molluscs, crustaceans, small fishes, and possibly sea snakes.

So what is so special about the zebra shark?

Let me tell you a story about a zebra shark, called Leonie, at the Reef HQ Aquarium in Townsville, Australia. In 2016, the beautiful Leonie laid eggs and produced three pups (babies). Now, you may be thinking what is so special about that? Sharks having babies isn’t exactly unheard of… 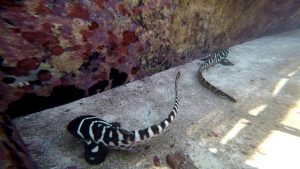 The first theory of how this miracle happened was that Leonie may have been capable of storing sperm from her previous mate. However, when biologists tested the DNA from the pups and possible parents, they found that the pups only had cells from Leonie. This was possibly the first time scientists had seen this type of asexual reproduction, known as parthenogenesis in a zebra shark.

Parthenogenesis is a type of reproduction where an egg develops into an embryo without the sperm from a male. This reproduction strategy is more common in plants and insects. However, there are documentations of an increasing number of other animals reproducing by parthenogenesis, such as Komodo dragons, vipers and even turkeys. It has also been reported in sharks such as hammerheads, black tips and sawfishes, however, in these cases the female animals were never introduced to a male.

In most of these previous parthenogenesis cases, the females were from captive environments and never had any exposure to male mates during their reproductive prime. That makes Leonie one of the rare individuals known to have had babies by sexual reproduction only to switch to asexual reproduction later on.

So Leonie adapted to her circumstances, and scientists believe she switched because she lost her mate. This makes us wonder… “Could this occur in the wild?”, and if so, “How often does it?”. One reason why we haven’t seen it before could be because we haven’t been looking for it.

One thing is for sure… Leonie the zebra shark brought a whole new meaning to the saying “independent woman!” 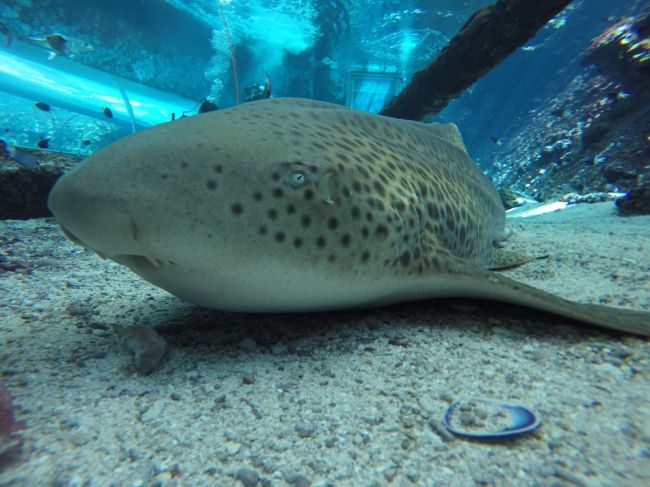