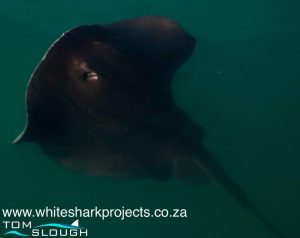 Gansbaai is a special place in the fact that it has a unique marine ecosystem. Here at White Shark Projects we feel very lucky that we get to experience the wonderful marine wildlife Gansbaai has to offer during our shark cage diving excursions. Recently, we have had some great activity from one of my favourite animals in the area – the short-tail stingray (Bathytoshia brevicaudata).

What is a short-tail stingray?

The graceful short-tail stingray is mainly a bottom dwelling species found off southern Africa, Australia and New Zealand. In southern Africa they are predominantly found offshore at depths between 180 – 480m, however, there are a few places around the Western Cape, South Africa where you can see these beautiful animals in shallow water. This is the largest of the marine stingray species and has been known to reach widths (pectoral tip to pectoral tip) of 2.1m and weigh over 350kg. Short-tail stingrays have a broadly triangular snout and a diamond-shaped pectoral disc – the pectoral fins are connected to the sides of the head and trunk which forms a disc. The top of the stingray is usually grey to brown in colour with pale blue/white spots at each pectoral fin base. The underside is mostly white but darkens towards the edges of the fins and tail. 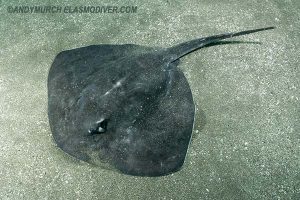 It has a thick short tail (hence the name) which is usually armed with two stinging spines about half way down the tail, the front one small and the back one is much larger. Although their stinging spines can inflict severe wounds, short-tail stingrays are actually more inquisitive than aggressive.

Short-tail stingrays feed on both burrowing and midwater animals, including molluscs, crustaceans, worms and small fishes, which they crush with flattened teeth (Two Oceans).

Sightings around the boat 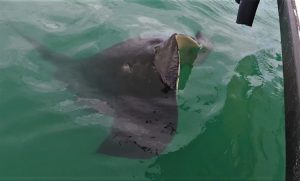 Short-tail stingray coming up to give our cage diving vessel, Shark Team a closer inspection. Still captured from a video made by White Shark Projects crew member, Lee

We have had magnificent short-tail stingray activity around our cage this summer which is probably due to the water temperatures reaching an abnormally high 22oC. Also, being elasmobranchs, like sharks, stingrays also have a super sense of smell and are attracted to our boat’s chum (fishy oily soup). The stingrays have frequently been coming up to the surface and even breaching on the bait. Twice, we have even had a stingray come right up against the cage to give the divers a closer look, which is something that is very rare to see. 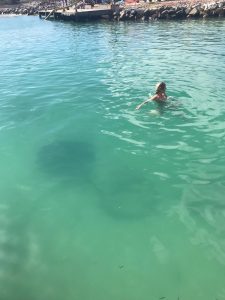 White Shark Projects arrange a variety of excursions for our volunteers that allow them to experience the jaw dropping scenery and wildlife the Western Cape has to offer. One of the excursions we organise for the volunteers is a day trip to Cape Agulhas, the southernmost point of the African continent (where the Indian Ocean and Atlantic Ocean meet). About 4 kilometres from Cape Agulhas is a beautiful old fishing village called Struisbaai. Struisbaai harbour is famous for its friendly short-tail stingray encounters. White Shark Projects usually stop in Struisbaai on the way back from Cape Agulhas to look for stingrays for our volunteers to swim with. The past few times we had been to Struisbaai, we had no luck with the stingray sightings…. Until recently. Last week our volunteers were lucky enough to have the most amazing encounter with these majestic animals. Stingrays are attracted into the harbour when the local fishermen wash the fish entrails off their boats into the sea. Our volunteers were having a swim in the glorious blue sea of the Indian Ocean… when a few stingrays came up to greet them. This encounter showed our volunteers how curious and remarkable these animals are, not at all aggressive.

Despite being common in South Africa, Australia and New Zealand, very little is known about this species due to lack of research. However, because they are predominantly bottom dwellers trawlers often catch them as bycatch and discard them. More research needs to be conducted on the population status, reproductive cycles and nursery areas of short-tail stingrays. 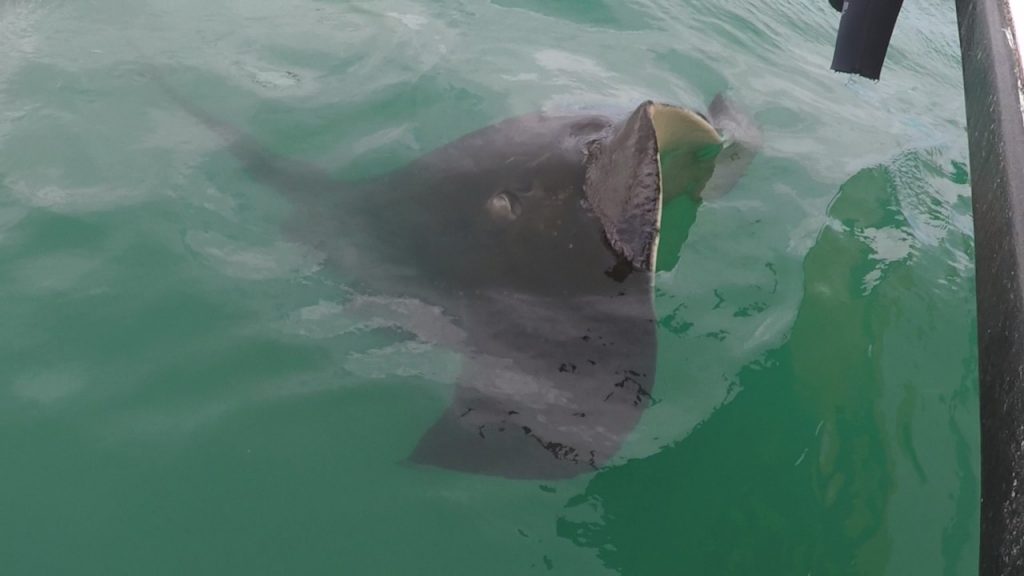 Short-tail stingray coming up to give our cage diving vessel, Shark Team a closer inspection. Still captured from a video made by White Shark Projects crew member, Lee

To experience the wonderful wildlife Gansbaai has to offer – contact our booking team!

Interested in experiencing the jaw dropping scenery and wildlife the Western Cape has to offer? Volunteer at White Shark Projects!