Eat your greens, so you grow up big and strong!

When people hear the word “SHARK” they think of a meat eating ocean predator. The infamous Great White Shark’s diet for example consists of things like – seals, rays, smaller sharks, game fish and dead whales. HOWEVER, recent studies have discovered that there are at least two species of shark that are omnivorous – meaning they eat both plants and animals. 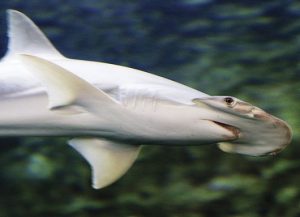 Bonnethead shark – Photo by A. Reitsma, Aquarium of the Pacific

Take the bonnethead shark (small cousin of the hammerhead) that is found in shallow coastal waters in the Gulf of Mexico, US Pacific. It was originally thought that these little guys preferred to eat shrimps and crabs which are an abundant food source in the seagrass areas the sharks inhabit. Even though it had been noticed in the past that seagrass was ending up in bonnethead guts, it was just thought the seagrass was incidental and provides no nutritional value – according to Samantha Leigh, a researcher part of the team investigating the shark’s diet. So, scientists at the University of California in Irvine, and Florida International University in Miami, decided to investigate the shark’s dietary habits. Incredibly, their findings showed that bonnetheads are able to digest seagrass with enzymes that break down plant components such as starch and cellulose. Additional tests conducted by the team showed that high levels of the seagrass carbon isotope were also found in the bonnethead’s blood, suggesting that they may actually rely on seagrass for sustenance. It was estimated that up to 62% of the bonnethead’s diet consists of seagrass, making it the world’s first omnivorous shark – or so they thought…

Even more recently, it was discovered that the bonnethead shark is not the only species that eats its greens. Researchers at the University of Tokyo, discovered that the world’s largest shark, the whale shark, also eats plants. The team took blood and tissue samples from eight whale sharks that were accidentally caught in nets off Japan between 2015 and 2016.They then freed the sharks after the samples were collected. They compared these blood and tissue samples with that of captive whale sharks living in Okinawa Churaumi Aquarium in Okinawa, Japan. The sharks residing in the aquarium were fed krill, squid, fish and prawns so the data from the tests obviously showed that these sharks have a carnivorous diet. HOWEVER, the tests from the wild whale sharks showed that around half of their diet consists of plant material such as seagrass and algae.

I guess my Nan was right when she said “Eat your greens and you will grow up big and strong!” – just like a whale shark Nan!

All jokes aside, the fact that whale sharks which are classified as Endangered on the IUCN Red List, are eating plants maybe a response to overfishing or climate change reducing their natural prey – possibly meaning they have to rely on other sources of nourishment.

Here in Gansbaai, I have witnessed the odd bronze whaler shark engulf a piece of kelp, however, for our bronzies it is more likely a case of mistaken identity or just plain curiosity.

Perhaps we will learn of more shark species taking up Bruce’s motto in the future – “Fish are friends, not food”.

CHANGE YOUR LIFE – COME DIVE WITH US #‎WhiteSharkProjects