Bitten off more than they could chew! 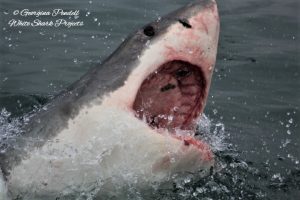 White Shark Projects has been running for an incredible 30 years and on occasion we have witnessed nature at its best – The incredible battle of a great white predating on a Cape fur seal. However, even though great white sharks are one of the ocean’s most powerful predators, with a bite force three times mightier than a lion, sometimes their eyes are too big for their belly. 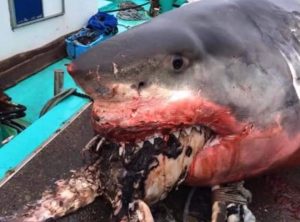 Deceased great white shark with giant turtle hanging out of its gob in Japan. Photo by Greg Vella -Facebook

Recently, photographs went viral of a great white shark that had seemingly choked to death on a sea turtle in Japan. Greg Vella shared images of the dead shark on the Facebook group Commercial Salmon, Albacore & Crab Fishers. He wrote in the Facebook post that he was out fishing in Japan, Pacific Ocean side, when he heard talk on the radio that there was a great white swimming around with a turtle hanging out of its mouth. Sadly the next day, the same shark which weighed an incredible 4,500 pounds, was found dead and tangled in some netting. When interviewing captains that saw the shark the previous day, they stated that the shark looked close to death as it could not dislodge the turtle. He also stated that the commercial fishing guys were bummed as great whites do not bother their fishing and do not eat their catch. 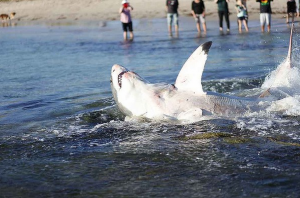 Tash Tapper shot a video of the shark thrashing around, probably trying to dislodge the sea lion.

This is not the first time a great white shark has been seen apparently choking. In 2014, a great white shark was filmed thrashing around frantically in shallow waters at Coronation Beach, Perth, Australia before becoming stranded. According to the Western Australia Department of Fisheries the 4 metre shark had no visible signs of injury, however, they discovered a large Australian sea lion lodged in its throat. Principal Research Scientist Dr Rory McAuley said that the large sea lion may have damaged the shark’s internal organs or blocked water flow to the shark’s gills, resulting in its death. Another possibility is that the shark beached itself while attempting to dislodge the sea lion from its throat.

These great white sharks definitely had bitten off more than they could chew!

Shockingly, it is estimated that there are only between 3000 to 5000 great white sharks left on the planet. Shark life history characteristics such as slow growth rates, late sexual maturity and low reproduction rates mean it is hard for these species to recover their populations. No matter what the circumstances were, it is always sad to see an animal as vulnerable and beautiful as the great white shark meet its end.

Ready to experience these magnificent animals yourself? Get in touch.