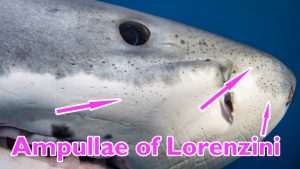 Sharks are amongst the most streamlined and efficient hunters on earth and they have made all their senses in lethal weapons, like sight, hearing, smell, taste and touch. Except they have a sixth sense, called the Ampullae of Lorenzini which are first described in 1678 by researcher Stephan Lorenzini. Sharks have a network of special cells that can detect electricity, called electroreceptors, in their heads. They use them together with the olfactory for hunting and navigation. This sense is so developed that sharks can find fish hiding under sand by honing in on the weak electrical signals emitted by their muscles contractions.

The ampullae of Lorenzini are modified parts of the later line system and primarily sensitive to electrical fields (generated by activities of the prey). They form a series of tube-like structures just beneath and parallel to the skin. The ampullae are concentrated on the head, particularly on the ventral and dorsal surfaces of the snout and posterior to the eye. These pores are filled with thick fluid that has excellent electrical conductivity. According to a new study, this thick fluid offers the highest proton conductivity in the natural world. At approximately 2 ± 1 millisiemens per centimeter, this fluid’s conductivity is only 40 times lower than the polymer Nafion (a synthetic material known for its superior conductivity). If you take a look at the picture below, you can see the pattern formed by the ampullae. 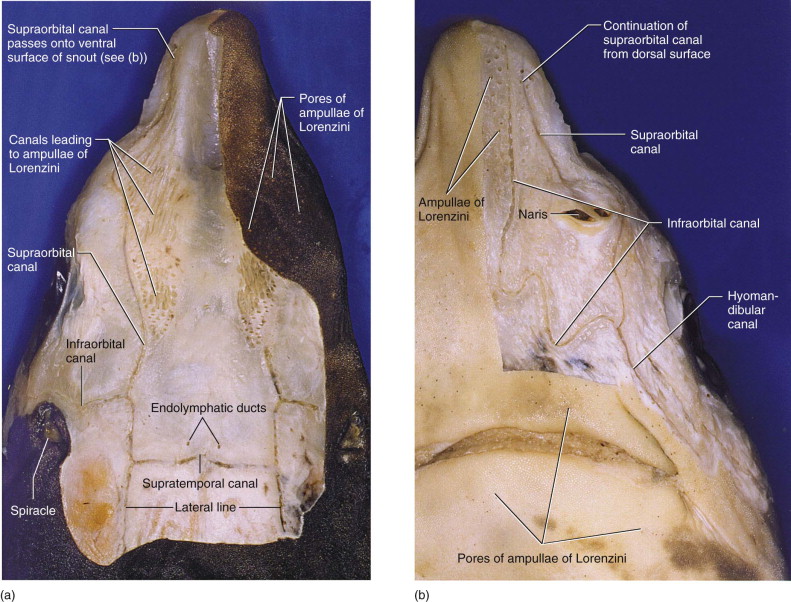 Head of the shark partially skinned in (a) dorsal and (b) ventral views showing ampullae of lorenzini – by Gerardo De Iuliis & Dino Pulerà.

Even though all sharks possess these ampullae, there is a species which evolved even further, the hammerhead sharks. The distinctive shaped “hammer” head of these ocean predators is called a cephalofoil, and it has some small variations among the different species of hammerheads. So basically, the cephalofoil increases the hammerhead’s ability to sense prey. Because hammerheads have a broad flat heads, the ampullae are spread out over a greater surface area, giving the shark the ability to cover more ground and sense its prey easier.

Clearly, electroreception is a survival tool for the sharks and its reappearance throughout history can tell of its efficiency, but there is still much to discover about how it works, how its related to cognitive abilities and whether it could be affected by human activities.

To learn more about shark senses read our previous blogs!

To witness these magnificent creatures in real life – contact us!